The time is now. Join the movement for Racial Justice.

Breonna Taylor was an award-winning EMT and model citizen. She loved her family and community, work…
11,441,670
supporters
Sign now
Started by I Run With Maud

Justice for Ahmaud Arbery! I Run with Maud!

Derek M Chauvin is a Minneapolis police officer who killed George Floyd on Memorial day. May 25, 20…
3,000,525
supporters
Victory
Started by Kaley B.

Tony McDade was a transgender black man who got killed by police in Tallahassee. As of right now I …
1,668,685
supporters
Sign now
Started by Markus Stanovich

Ahmaud Arbery a black unarmed jogger was "profiled" and subsequently was involved in a FATAL encoun…
2,175,936
supporters
Sign now
Started by Viangelly Pena

Ban the use of inhumane rubber bullets

Over the past week, there have been nationwide protests in the United States for the Black Lives Ma…
1,259,751
supporters
Sign now
Started by Cece Jones-Davis #FreeJuliusJones

UPDATE: Thanks to a massive global outcry – including more than 6 million signatures on this petiti…
6,594,404
supporters
Sign now
Started by Chris Hill

Life For A Life: Mandatory Life Sentencing for Police Brutality Resulting in Death

Far too many times police brutality has got off with just a slap on the wrist while families are le…
1,214,707
supporters
Sign now

“I can’t breath” were George Floyd’s last words as he became yet another victim of police violence and racial injustice. Thousands of communities in the United States and across the globe share similarly painful stories of Black and Brown people who have been killed, abused and violated at the hands of racial injustice. Countless others move through life fearful that their parent, sibling, child, partner or friend might be the next victim.

The voices of these communities have been ignored for far too long. Millions of people around the world have decided that enough is enough, and are turning to Change.org to have their voices heard and grow a national movement for justice.

From greater bias training to civilian oversight of police departments, everyday people are demanding an end to the violence and injustice to Black and Brown people. The movement needs your voice – start, sign and share a petition today. 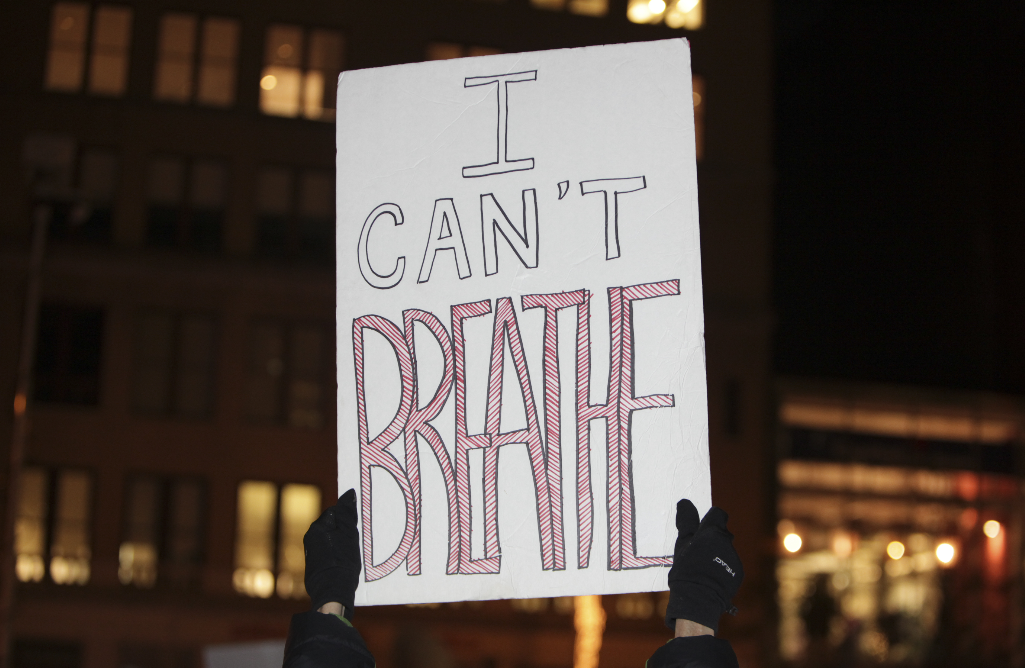 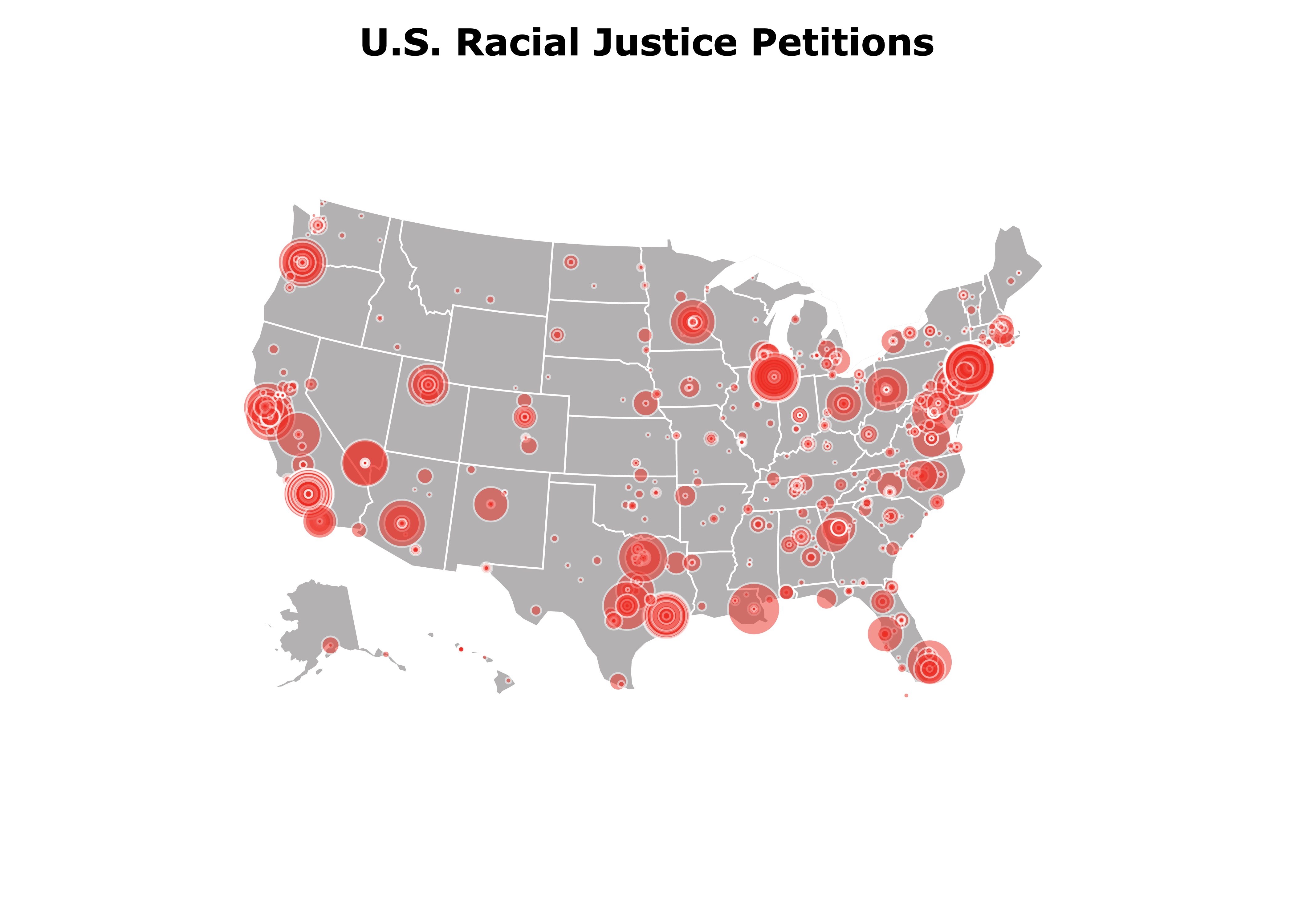 Most popular petition starters in this movement

Reach out to decision makers that have not responded. What can you do?

Petition Becomes Most Popular Ever In U.S. For Change.org

If You Can’t Attend a Protest, Here’s How to Help in the Fight Against Racial Injustice

Updates from the community of this movement

November 18th marked the 1-year anniversary of Julius Jones’ commutation from death row to life without the possibility of parole. We are so grateful that Julius is alive and that the Jones family is able to visit with him, hold his hand, and hug him tightly nearly every week after over 20 years. That would not have been possible without all of you.

Julius is STILL an innocent Black man serving a life sentence in prison for a crime he did not commit. We will need your support in the coming months as we work to bring Julius home. Please join us in taking the pledge to keep fighting for Julius’s freedom!  Click the link below!

Thank you so much,

You may have already seen this update. But as someone invested in the liberation of Julius Jones, an innocent Black man who you helped free from death row last year, we wanted to make sure you had an opportunity to learn what’s happening in Oklahoma right now and take action.

Twenty five people have been set to be killed by the state. One person, James Coddington, was already killed two weeks ago despite the Oklahoma Parole and Pardon’s board voting for clemency.

Governor Stitt ignored his own appointed Parole and Pardons board, and chose death instead!

The people scheduled for execution include cases with serious claims of innocence and racial bias, just like Julius’ case. Others include severe mental illness, intellectual disability, exorbitant childhood trauma and abuse. These cases reveal deep systemic flaws in Oklahoma’s capital punishment system and illustrate the egregious unfairness and cruelty of the death penalty in general.

But it’s never too late. If enough people make noise, we can push Governor Stitt to issue a moratorium on the death penalty.

It’s been almost 1 year since you and 6 million others around the country took action to help successfully stop the execution of Julius Jones! We’re reaching out on behalf of Julius today to request your help to save lives in Oklahoma once again.

Right now there are 25 people scheduled for execution in Oklahoma. We can stop these executions by once again pushing the Governor to take action and issue a moratorium on the death penalty.

Sign the petition: Governor Stitt, please issue a death penalty moratorium and save the lives of 25 people today!

Together we helped save Julius, a Black man who has spent the past 20 years on death row for a crime he did not commit. Though Julius is no longer on death row, he’s still serving a life sentence without the possibility of parole despite being innocent. Our fight for Julius’s liberation is not over. But as we continue to strategize for Julius’ freedom, we must also work to shut down the death penalty system that threatened his life in the first place.

The 25 people scheduled for execution include cases with serious claims of innocence and racial bias, just like Julius’ case. Others include severe mental illness, intellectual disability, exorbitant childhood trauma and abuse. These cases reveal deep systemic flaws in Oklahoma’s capital punishment system and illustrate the egregious unfairness and cruelty of the death penalty in general.

Together we can end the cruelty of Oklahoma’s death penalty.

Mama Jones, Antoinette Jones, Jabee Williams, and me – Cece Jones-Davis, continue to fight for justice for Julius and others impacted by the death penalty in Oklahoma because we know too well how evil this system is. We believe that the only way to be certain that the state never puts another innocent person on death row again, is to stop this death machine all together.

This is why we’ve teamed up with death row exonerees from the organization, Witness to Innocence to implore Governor Stitt to issue a moratorium on the Oklahoma death penalty TODAY.

Join us in the fight for justice! Sign the petition today.

Happy New Year to all Justice for Julius Supporters,

You ventured with us through the unimaginable at the end of 2021. Julius Jones’ life was spared just hours before the scheduled execution, and we are relieved that he is alive. We are more determined now more than ever to continue seeking justice for him, and address the social issues that have caused him and his family such pain for decades.

That said, the death penalty must go.

It almost killed an innocent man in Oklahoma in November. It has killed innocent people in the past. It will continue to threaten the lives of wrongfully convicted human beings if we do not dismantle it. Now.

We would love your support in calling for an end to Federal executions by signing our partner, Death Penalty Action’s, petition TODAY.

Thank you for your support. Stay with Justice for Julius in 2022 as we continue to fight for freedom for Julius Jones.

Julius’ execution has been called off. Only three hours before he was scheduled to be executed, the governor commuted his sentence to life without the possibility of parole.

We are crying tears of relief. After such a long, hard fight, Julius will live to see another day — and that is thanks to you. Thank you for every signature, every tweet, every phone call and share. We made it politically impossible for Governor Stitt to allow Julius to die.

Today we celebrate. Tomorrow we keep fighting. Julius still is not free. He deserves to walk out of jail and go home to his family, to be surrounded in love.

The fight ahead will be long, and we’re going to need all the power we can muster. Stay tuned.

Aurora has agreed to pay $15 million to Elijah’s family to settle the civil rights lawsuit. The settlement is one of the largest police-related settlements in U.S. history.

Elijah’s mother filed the federal civil rights suit last year targeting the city of Aurora as well as the police officers and other first responders who remain responsible for Elijah’s death.

The officers and paramedics who killed Elijah will soon be on trial. Stay tuned for updates as we continue to pursue justice.

Take your activism to the next level. Login and write to the community.

What can you do to get an answer?

What most bothers a Decision Maker is social and public pressure. You can get a person responsible for solving a petition to answer the supporters of the campaign. Encourage yourself to take sides for what matters to you. Take a look at these tactics online:

Close online tips to get a Decision Maker answer

Social change is made between all. Ask your friends and family members to also sign petitions in this movement.

At Change.org we remember and honor all those who have tragically lost their lives to police violence and racial injustice. Say their names.

People everywhere are fighting injustice. The movement needs you.

At Change.org we remember and honor those who have tragically lost their lives to police violence and racial injustice.